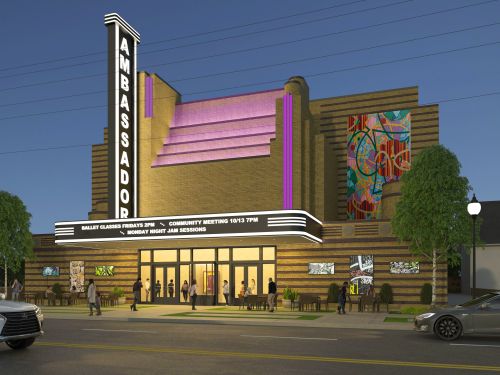 In 2018, Artspace was invited to the City of Baltimore by the Mayor and other civic and community leaders to develop a proposal for the redevelopment of a long-vacant, Art Deco icon: The Ambassador Theater. Located on Liberty Heights Avenue in Northwest Baltimore, the redevelopment could fill the need for a cultural destination in an area with few existing artistic outlets for creators and patrons. So, in the summer of 2019, Artspace led a series of conversations to listen to ideas. Residents of Forest Park and Howard Park, the predominantly Black neighborhoods where the Ambassador is located, contributed concepts of what they wanted to see created for their community if the Ambassador Theater was redeveloped. Artists of varying disciplines from across the City provided input as well.

Inspired by the powerful visions presented, Artspace purchased the historic theater at public auction in April 2019 and, as owners, have set a plan into motion to create a new community arts and cultural center. In response to the community input, Artspace’s adaptive reuse of the Ambassador will provide affordable performance, practice, and rehearsal space for small organizations or individual artists, as well as creative technology, sound and video production “labs.”

Artspace has been very intentional in the selection process to hire a local architectural firm with a design team that reflects the community. Ultimately, after a thorough RFQ process that concluded in May 2020, Quinn Evans was selected. Not only does Quinn Evans bring years of experience repurposing historic structures, many of them into new arts offerings across Baltimore; they also present a team led predominantly by women and architects of color (in a field where women and minorities make up roughly only 17% and 4% of the profession, respectively). Design work will advance even amid the pandemic, with a proposal to be presented to the community and the artists in early 2021.

To date, Artspace has received funding support from the Pimlico Community Development Authority (PCDA) as administered by the City of Baltimore, the State of Maryland Capital Bonds Bill, and an award by the Baltimore Community Foundation. “The redevelopment of the Ambassador Theater into a new hub of artistic activity in Northwest Baltimore, where BCF is making focused investments in neighborhoods and schools, combined with the fact that it will primarily serve Black artists from the community, makes this project a natural fit for the Foundation,” said Billie Malcolm, Program Officer, Baltimore Community Foundation.”

Artspace is continuing to fundraise with a goal of starting construction sometime in 2022. Over the coming months, Artspace will finalize the interior space plan with Quinn Evans and, once that step is complete, will reach out to neighborhood residents and artists to continue the conversation. For more information, please visit www.artspace.org/ambassador-theater.