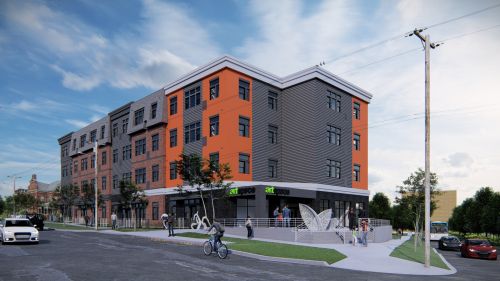 Minneapolis, MN, July 26, 2022 — Artspace Projects, Inc. announced a significant award in housing tax credits from the New York State Homes & Community Renewal (HCR), in support of the development and construction of Artspace Utica Lofts. The Artspace Utica Lofts will provide 43 affordable live/work units on the upper floors, and 940 square feet of community space on the ground floor. The landmark project is located in the City of Utica’s Downtown Revitalization Initiative target area and designated United Nations resettlement community, which includes a creative placemaking approach to stimulate economic investment. With a total projected cost of roughly $16 million, Artspace’s catalytic, energy-efficient development will be a four-story building located at 1020 Park Avenue, at the intersection of the downtown Commercial and Arts & Cultural Districts, centrally located between the Stanley Center for the Arts and Munson-Williams-Proctor Arts Institute.

The $4.9 million award from HCR includes funding in the form of 9% Low-Income Housing Tax Credits and New York State Low-Income Housing Credits, in addition to funding from the New York State Housing Trust Fund. The funding is one of 16 awards allocated to various development projects across the State as part of Governor Hochul’s initiative to support vulnerable populations and promote equitable neighborhoods and is crucial in meeting the project’s expected completion date in the Spring of 2024. Units will be affordable for those earning between 40 to 80% of Area Median Income with a preference for artists.

“We are thrilled with the awards from Homes and Community Renewal,” said Becky Carlson St. Clair, Artspace Director, Property Development. “This is a major milestone towards moving this project from a dream to a reality. It has been a long road for the project, and we want to thank the community and the Mayor and staff for their support and patience. Artspace Utica Lofts will be transformational for Park Avenue and the downtown and will benefit the city as a whole.”

“This is a great example of how positive things can be achieved through collaboration and public-private partnerships,” said Mayor Robert M. Palmieri. “This project will attract artists and provide needed housing. With the support of New York State Homes & Community Renewal, and local organizations such as the Community Foundation, this project is coming to fruition. I thank Artspace for their investment in our city.”

“We have long supported Artspace’s planned presence in Utica, and it’s exciting to see the development moving forward,” said Alicia Fernandez Dicks, Community Foundation president and CEO. “Its complementary commitment to artists and affordable housing will be another of the transformational pieces of an increasingly vibrant neighborhood and community.”

The partnership between Artspace and the City of Utica developed in 2016 when a group of local leaders invited Artspace to conduct a series of studies to quantify the demand for artist spaces. Data gathered in 2016 and 2017, including a survey of nearly 600 respondents, indicated a substantial need for space for artists to both live and conduct creative work downtown. 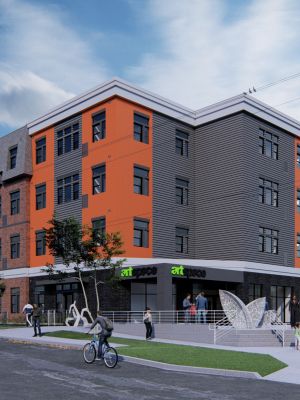