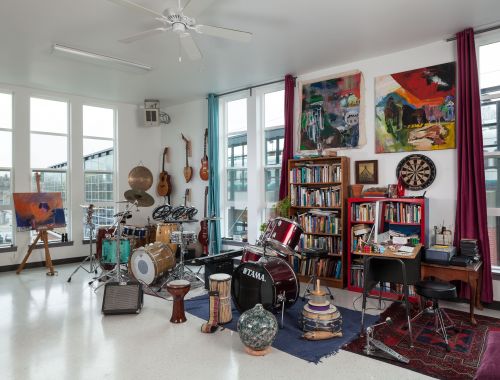 In cities across the U.S., one of the most potent forces for urban renewal is the intrepid, resourceful, indefatigable artist. A building full of them, in fact. But for the artists, there isn’t always a happy ending. In case you’re unfamiliar with the story, it goes like this. In search of inexpensive spaces in which work, artists seek out underutilized buildings—often, old warehouses or other industrial structures in sketchy neighborhoods—with low rents, zero amenities, and lots of room to make messes and masterpieces. In exchange, they’re left alone. They set up the space so they can both live and work there, installing any plumbing and wiring they need. Their presence attracts more artists to the building; together, the artists attract outsiders into the neighborhood with events and open houses that showcase their art. They also take their art-making experiences out into the community. People begin to notice. The neighborhood becomes a go-to hot spot of creativity and vitality. Restaurants, bars and coffee shops move in next door to feed and water the artists and the visitors, art collectors and other creatives who explore the area. Property values begin to rise. Eventually, the artists are priced out of the community they helped create. So they find another run-down building in an iffy neighborhood and start again. The story even has a name: The SoHo Effect. In the late-1980s, a new chapter was drafted when five organizations seeking to disrupt the narrative received a collaborative grant from the Apple Foundation to explore the possibilities of creating affordable live/work housing for artists. One of those organizations was Minneapolis-based Artspace. In 1986, Artspace had transformed itself from an advocacy organization to a non-profit real estate developer with the mission of creating and preserving affordable live/work housing for artists, so artists could stay in the neighborhoods they helped renew. Artspace was the only one of the five organizations to not only survive, but also thrive. In 1990, the non-profit developer opened its first project: the Northern Warehouse Artists’ Cooperative in the Lowertown neighborhood of downtown St. Paul, Minnesota. The project was the first to utilize the Low Income Housing Tax Credit to help finance affordable artist live/work housing. The project was also financed so that rents would remain permanently affordable. In 1996, Artspace went statewide, completing the Washington Studios, affordable live/work housing for artists, in Duluth, Minnesota. Two years later, the organization completed its first national artist housing project: the Spinning Plate Artist Lofts in Pittsburgh, Pennsylvania. By 2007, Artspace had developed 14 affordable artist live/work housing projects throughout United States, includingRiverside Artist Lofts in Reno, Nevada; National Hotel Artist Lofts in Galveston, Texas; Switching Station Artist Lofts in Chicago; Tashiro Kaplan Artist Lofts in Seattle; and Mount Rainier Artist Lofts in Mt. Rainier, Maryland.

Camille LeFevre is the editor of The Line.

This story is part of a national series—supported by Artspace—about the arts, housing and community transformation.