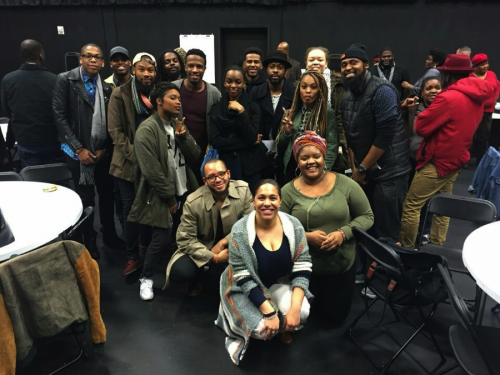 In Memphis as in other places, artists struggle daily with a multitude of issues, from securing affordable housing, to raising capital, to just having a space to showcase their work. Add the factor of race to the equation, especially in an unequal city, and you hit even more roadblocks. This is the case for all artists of color, and in Memphis, for black artists in particular. While there are arts organizations in Memphis, many black artists don’t feel welcome in these historically white spaces and often feel shut out from the opportunities, funding streams, and legitimacy these organizations can bring. To remedy this, black artists form both informal and formal spaces to support one another’s work and share resources to increase their visibility in Memphis. The Collective (The CLTV) is a Memphis-based group of young artists and creatives doing this work, fighting to build a viable and inclusive art scene that situates an array of black art as essential to understanding our city, this moment, and our history.

What follows is an interview conducted by Marco Pavé, an artist, musician, writer, and local arts advocate and a Memphis native writing for the Artspace project in Memphis, the South Main Artspace Lofts.

What Is the Collective?

The Collective is an arts organization dedicated to providing a platform to African American artists within the city. It is comprised of artists working in various media, from visual arts to metalwork to clothing design. Through arts-based programming, workshops, and community building efforts, it encourages the use of creative expression as a vehicle for artist and community growth.

I had the opportunity to sit down with a few leaders in The Collective and get their thoughts on the current art scene in Memphis and to hear about their personal work as artists in Memphis.

Marco Pavé: Tell us about your work and how you got into arts advocacy.

Victoria Jones: While in college at Tennessee State University (TSU), I got into art after I ran across a few friends who I had discovered were amazing artists, but they would never show their work in public. They had their great work just stored in their dorm rooms. So, in 2010 I started an arts organization to inspire artists to showcase their art. That eventually went on to become the black arts council for TSU. After graduating from TSU, I got connected with Crosstown Arts here in Memphis and started as an event manager. But after working with Crosstown for a few months, I noticed that there weren’t any events for black artists nor were there many black patrons coming to the shows. This felt strange given that Crosstown arts is in a predominantly black neighborhood. I started to organize the artist friends that I knew from the city to create a space for young black artists working in the Memphis community.

MP: What’s the vision/goal of The Collective?

Victoria: The goal of The Collective is to create an arts community in Memphis that generates more professionally developed artists. We want The Collective to be the example that shows young Memphians that art can be a viable career.

MP: What do you envision The Collective being in the next five years?

Victoria: In the next five years I hope to have a headquarters for our organization. Right now it’s a bit scattered, but we’ve still been able to produce nearly a dozen events over the last year. In five years I hope that we have access to capital to be able to provide grants to artists who want to take on large projects. I hope that The Collective can become nationally recognized as a leading arts organization in Memphis.

MP: What’s your experience with housing as an artist?

Victoria: It’s always been a struggle for me and for other artists that I know. I’ve seen people struggle to turn their childhood bedroom into a makeshift studio space, I’ve been in groups that have had to meet at some 24-hour diner because we didn’t have the space. The struggle for artists to find housing in Memphis is probably one of the toughest problems.

MP: What would you like Artspace to provide for Memphis artists, once it’s open?

Victoria: This is not a particularly tangible thing, but I would like Artspace to provide an inclusive environment that is open and welcoming to artists of color. I would also like to have group studios, conference rooms for organizations like ours, an artist-run restaurant, and a coffee shop.

Marco Pavé: How did you get into art?

Kenny: I started drawing at five years old, and from that point on I knew that I wanted to become an artist. I transitioned to painting at 14 years old, and ever since then I’ve been planning and plotting on how to become a working artist.

MP: You have become quite the leader on the art scene in Memphis. Can you tell us more about your current work and accomplishments?

Kenny: Thank you! One of my most favorite things is that I created a new art style called Novi Art. Novi Art is acrylic paint, digital collage, and motion video. Last year, my “Surreal Kingdoms” work featured in the Brooks Museum for about five months as part of the “Art of Video Games” exhibit. I was also a featured artist at the Pink Palace Museum. Beyond the visual art, I am also a music producer. “Black Tux,” a song that I produced for Memphis artist, Marco Pavé, has been gaining a lot of traction. It was featured in The Source Magazine, SoulTain, All Hip Hop and more. I was also a top eight finalist for the K97 Beat Battle. I have also worked with some pretty well-connected people in the industry, including Rick Ross, Justice League, and Ken Lewis.

MP: In your view, what is The Collective? And what is your goal for the organization?

Kenny: The Collective is a group of like-minded individuals all working together to raise the profile of arts and culture in Memphis. I am glad to be working with a group of folks that all want the same things for Memphis. My goal is for The Collective to build the arts and culture infrastructure. We want to be able to provide not only grants to artists but provide paying jobs for artists; no one should have to work at FedEx and do their art “on the side.”

MP: What’s your five-year plan for The Collective?

Kenny: In the next five years, I want The Collective to become a well-oiled arts machine that is a part of local government and in charge of increasing diversity in Memphis art.

MP: What is your personal struggle with housing as an artist?

Kenny: Housing has been a problem for me since the age of 18. Even when I went off to college housing was a struggle. I had a place to sleep, but I didn’t have the space I needed to be an artist. It’s always been tough to take ideas from paper to a larger platform/canvas. I have lived in small apartments with no widows to shared spaces with non-artist folks; it all kills creativity.

MP: What would you like to see Artspace provide for Memphis?

Kenny: I am going to shamelessly plug myself for a second (laughs). I would love to have a headquarters for my business, Novi Arts, to take it to that next level. I would like to see an artist tearoom where artists come and collaborate and share ideas. An arts supply store would be amazing; the closest art store is a few miles away from South Main. Lastly, an artist-run food store or coffee shop.

I would like to thank both Victoria and Kenny for taking the time to talk with me about their work and about The Collective.