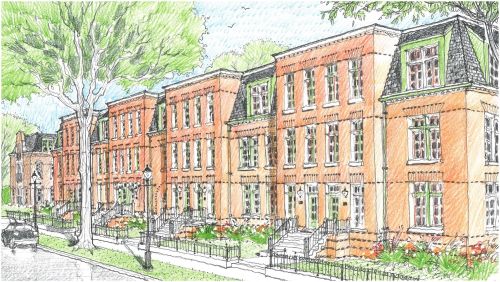 The development team of the Pullman Artspace Lofts (Artspace Projects, Chicago Neighborhood Initiatives and PullmanArts) has received the city, state and federal approvals needed to proceed with the project, and is in the process of raising the remaining funding needed to close on the project by mid-2017 and begin the 12-month construction phase.

The Development Team has chosen a site located on Langley Avenue, just south of 111th Street, approximately 18,500 square feet of vacant land book-ended by two historic apartment buildings. It provides the opportunity to integrate historic preservation with new infill construction and create an iconic group of buildings that anchor Pullman’s eastern boundary. The $16.2 million development will include 38 affordable, live/work units and approximately 2,000 sq. ft. of community space including a community gallery, working studio, meeting space, and classroom space for residents of the Pullman Community. This is the first new residential building to be constructed in the Pullman Historic District in decades.

In 2016 the project was approved by local, state, and federal authorities to proceed as proposed following the Secretary of the Interior’s Standards for Rehabilitation of Historic Properties. The Pullman Artspace Lofts will utilize federal Historic Rehabilitation Tax Credits and Low Income Housing Tax Credits (LIHTC), which will provide $12+ million in upfront equity to the project’s capital budget. With tax credits secured, Artspace and its partners turn their focus to the final phase of fundraising. To Date the project has received grant awards totaling more than $425,000 from LISC, Enterprise, Chicago Community Trust, the Gaylord & Dorothy Donnelly Foundation, The Richard H. Driehaus Foundation and the National Trust for Historic Preservation.

In addition to the crucial tax credits, in 2016 the project received approvals from the City of Chicago Department of Planning & Development and the City of Chicago Committee on Zoning, Landmarks and Building Standards to proceed as designed. The Commission on Chicago Landmarks has also reviewed and approved the proposed project. These approvals are critical to the development team as the project is in the historically significant Pullman community.

The neighborhood of Pullman is a planned community famed for its urban design and architecture. The Pullman Historic District was listed in the National Register of Historic Places in 1969, declared a National Historic Landmark in 1970, and designated as a Chicago Landmark District in 1972. On February 19, 2015, President Obama visited Chicago's Historic Pullman District to establish the district as a National Monument within the National Park System. Pullman National Monument tells the story of American opportunity and diversity intertwined with arts and culture and a legacy of significant labor, industrial, social and civil rights

In April 2015, AIA Chicago and the National Parks Conservation Association brought together urban planners, architects, landscape architects, engineers, economists and historians to create “Positioning Pullman,” a plan for the development of the Pullman National Monument neighborhood. Pullman Artspace is prominently featured in this plan as an important cultural and historic preservation project.

Through a generous grant from The Richard H. Driehaus Foundation, the development team held a two-stage design competition in search of an architect to restore two existing 19th Century residential buildings and design a new infill building that would respect the history and character of the Pullman’s National Monument. Like other Artspace developments, the complex also must attract artists from outside the community and provide shared space that spurs creativity. The Chicago office of international design firm Stantec won the competition with a design of a new three-story live-work building that incorporates traditional Pullman building features including front porches, mansard roofs and intricate masonry detailing. This project honors Pullman’s historic legacy as a destination for skilled artisans and artists while meeting contemporary affordable housing and community gathering needs. In addition, the Pullman Artspace Lofts will meet or exceed IHDA green design requirements and achieve Enterprise Green Communities certification.

Artspace is non-profit organization that uses the tools of real estate development to create affordable, appropriate places where artists can live and work. We consistently develop these projects in ways that also support more stable, healthy communities anchored in existing assets. Because Artspace owns each of the projects it develops, we ensure that they remain affordable and accessible to artists in perpetuity. Over the last three decades, Artspace has led an accelerating national movement of artist-led community transformation. While embracing the value the arts bring to individual lives, Artspace has championed the once-radical idea that artists living on the edge of poverty and chronically underfunded arts organizations can leverage fundamental social change. With headquarters in Minneapolis and ofﬁces in Denver, Los Angeles, New Orleans, New York, Seattle and Washington D.C., Artspace is America’s leading developer of arts facilities and has served as a consultant to hundreds of communities and arts organizations nationwide. Additional information is available at www.artspace.org.

The mission of PullmanArts is to protect, preserve and promote Pullman as a unique, major arts hub. Historically, the original company town of Pullman was built to be an exceptionally beautiful place that would attract and retain the best artisans and craftsmen to build luxurious Pullman Palace Cars. Today, the City, State and National Historic Landmark District of Pullman continues to entice and inspire a diversity of artists, whose creativity immeasurably enriches the community. In partnership with Artspace, Inc. and Chicago Neighborhood Initiatives, PullmanArts is working to build and program a major artist live/work space in Pullman. The project will entail of combination of new construction and adaptive re-use of historic, two multi-unit apartment buildings. PullmanArts also partnered with a range of local, regional and national groups to advance Pullman being designated as a National Historical Monument.  Additional information is available at www.pullmanarts.org.

CNI is a neighborhood-based community development organization that had its beginnings over a decade ago as Pullman Bank Initiatives. Formally launched as an independent organization on July 1, 2010, CNI achieved its federal tax-exempt status in August of the same year. To further its charitable purpose, CNI works collaboratively in low- to moderate- income communities to identify and implement high impact projects that promote economic development and community revitalization; combat community deterioration; create training and job opportunities for local residents; and create, rehabilitate and preserve affordable housing. Additional information is available at www.cnigroup.org