Six Acts of Giving Back

Since 2017, Artspace has focused our end-of-year publication on the theme of “Giving Back.” Not only is it timely, as winter months tend to bring reflection on compassion and philanthropy, but it gives us a chance to celebrate the goodwill and collaboration of Artspace commercial and residential tenants that impresses us year-round. The biggest challenge of these publications is the difficult decision of choosing which of many relevant stories will serve as our feature. So we decided more is more, and are sharing six acts of Giving Back across the Artspace portfolio. 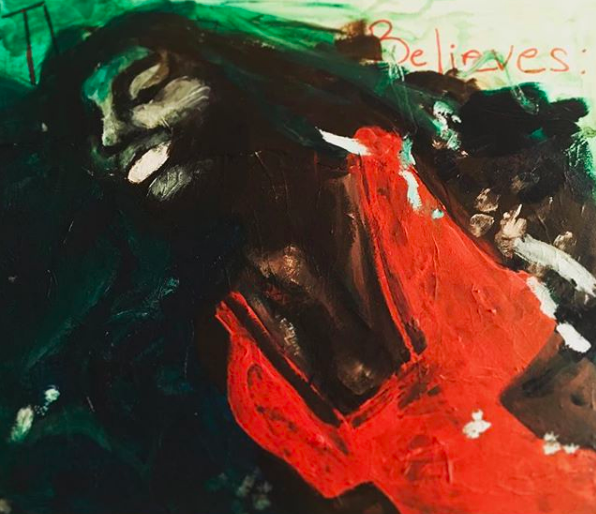 Maya James, This Woman Believes, 2018. Courtesy of the artist.

Maamoul Press launched a competition for emerging graphic novelists and the winner, Maya James, received a three-week residency to work on her first graphic novel in the Arab American National Museum’s artist residency space at City Hall Artspace Lofts in Dearborn, Michigan. Though only a 21-year-old college student, James has already made waves as a storyteller. She was a youth correspondent for Youth Radio; and she shared her experience as a biracial child encountering racism in a majority-white city in Michigan on an episode of the podcast, RISK! That story went on to run in the New York Times and USA Today. James’ visual artwork has also garnered attention, from a 2018 ArtPrize award to an award-winning series of portraits of inspirational black women that she displayed at the Grand Rapids African American Museum and Archives.

“I am here to represent community and people that are striving,” James said. Her graphic novel proposal, “LUKUMI: A Story for My Father,” focuses on a pair of best friends and the death of one of the girls. It weaves in multicultural elements from the word “LUKUMI” in the title, which James said references the Anishinaabe concept of First Peoples; to elements of the ancient Yoruba practice that James described as those living in this realm preparing for the next by revering ancestors. Three Orishas in her story represent black femininity and act as superhero guides to the girls: Oya, Oshun, and Yemoja. As part of her residency, James will make a public presentation at City Hall Artspace Lofts. Maamoul Press will also fund and publish her graphic novel. 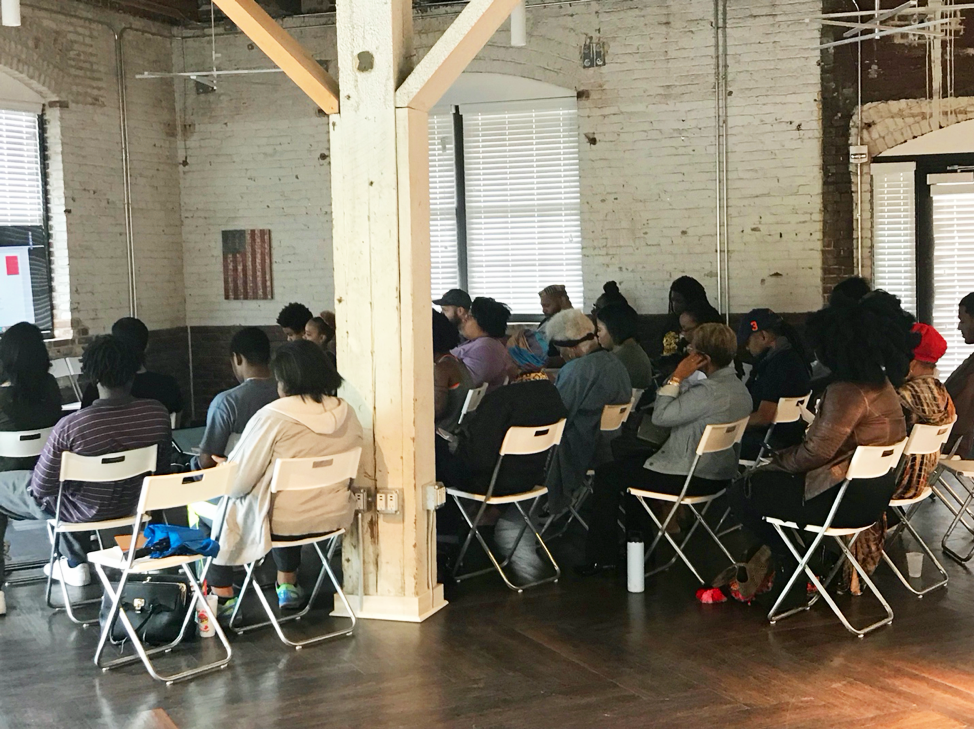 Based within South Main Artspace Lofts in Memphis, ArtUp is a startup that breaks down barriers in the creative economy, nurtures ideas that drive social change, and launches artists into creative entrepreneurship. ArtUp piloted the Accelerator for Creative Business program to support the growth of creative entrepreneurs—and they gave back to the Artspace community in a big way. The series, which cost $199 per person, was offered free of charge to Artspace residents locally and nationally. ArtUp Project Coordinator Katyana Dandridge explained that as an Artspace partner, “it just made sense for ArtUp to offer this program to people in different Artspace properties. We know these resources are hard to come by, and that most programs like this cater to the technology field. We wanted to offer this to creatives, so they are not dependent on the gig economy.” Eight local Artspace residents participated; as well as others joining virtually from City Hall Artspace Lofts in Michigan and Artspace’s Sailboat Bend Artist Lofts in Florida. The program ran Saturday afternoons, May 4 to June 29, with special sessions led by experts from Beats by Dre and Rutgers Center for Urban Entrepreneurship and Economic Development. Artspace residents’ success stories are rolling in: Njeri Fombi received a quote from an investor to open her own brick and mortar lifestyle store; while two others landed roles for the “Bluff City Law” TV series— Princeton James Echols as Production Assistant and Kenneth Wayne Alexander II as Set Dresser.

Act Three: Giving Back In Their Own Backyard 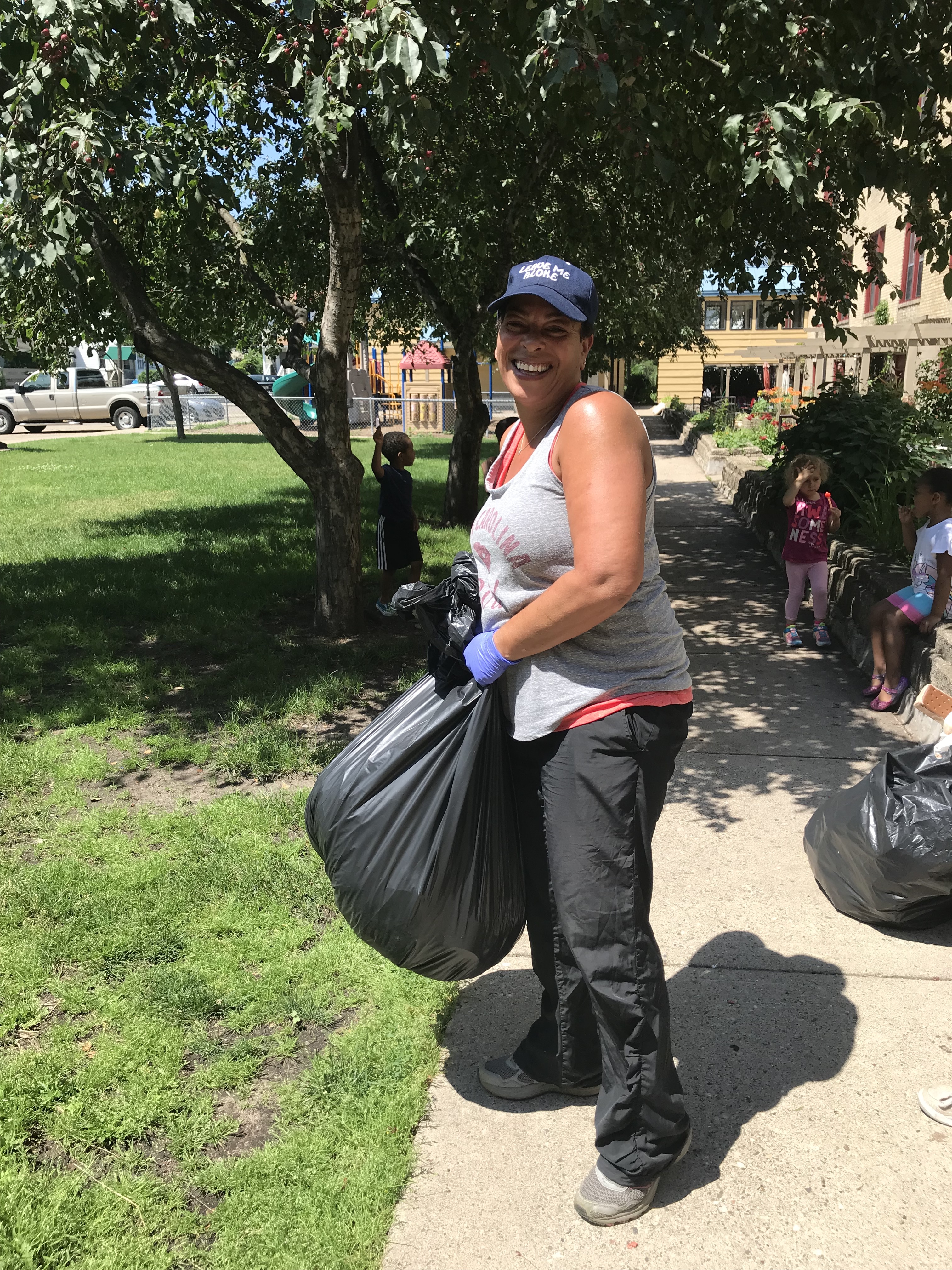 Michelle Presley, the organizer of the clean-up day. Photo by Jinza Thayer.

653 Artist Lofts is located in the northwest corner of Frogtown in Saint Paul, MN, tucked between a community center, greenspace, and the busy Como Avenue. The 36-unit building is L-shaped, with a generous courtyard. The geography is important to consider, since it creates a microecosystem full of families of various sizes and from distinct cultures and backgrounds. It is a small and vibrant enough community that the residents know one another by name and share social responsibility. In spring 2019, this happy hamlet experienced strain begot of neighborhood crime—driving the residents to organize. Weekly resident-led meetings were held; and collaborative, solutions-focused conversations covered topics such as security, kindness, and rediscovering feelings of ownership throughout their neighborhood. Artist resident Jinza Thayer credited these meetings with creating an opportunity for “bringing people together, folding new residents into the mix, and creating a supportive space. It wasn’t a space for complaints – it was a space for action.” That action took place over multiple months in the form of a new Security Committee led by residents Sarah Gustafson and Anita Lee, and building new lines of trusting communications internally, between property management and residents alike. Their work culminated in early July with a clean-up day led by resident Michelle Presley, wherein residents young and old tided their courtyard – their nexus – after what felt like a particularly long winter. According to Michelle, the day “brought out a sense of community and responsibility… We had a good time, cleaned up, pulled weeds, and topped it off with ice cream treats.” 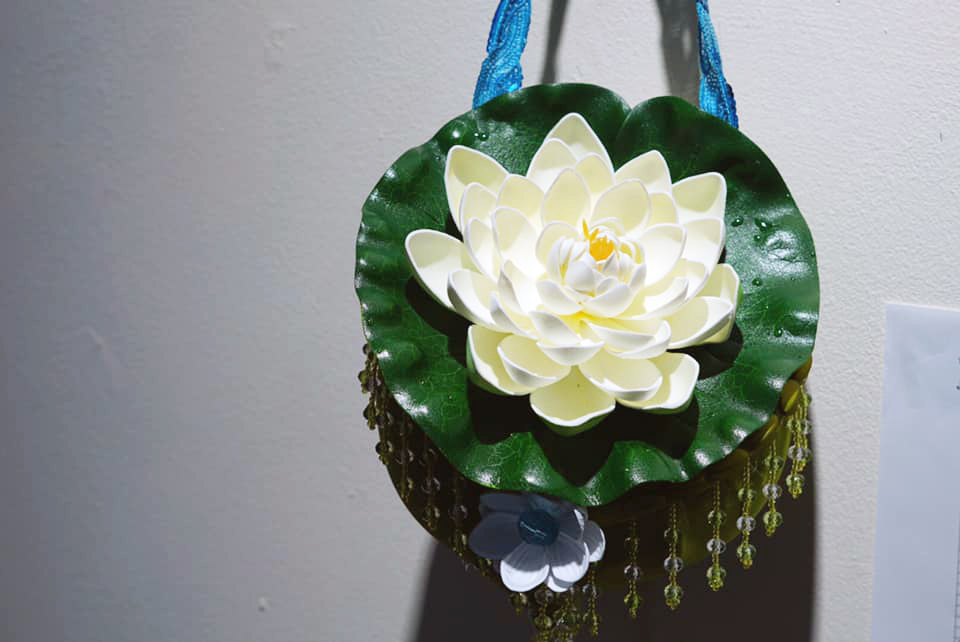 Textile artist Susan Marie Borden welcomes new opportunities. “Things come to me in life through the grace of the Lord,” she said. “It’s not praying, it’s just looking.” After losing several friends tragically to breast cancer, Borden realized her artistry could support breast cancer patients and survivors. Her first ARTbreast Initiative exhibit occurred in 2012. She invited artists to craft a decorative bust for an exhibit and auction that raised funds for the Breast Cancer Network of Western New York in Buffalo. It ran successfully, but Borden could not stage a similar event until her move into Artspace Buffalo Lofts in 2016—which offered another found opportunity. With available gallery space for her compassionate curating practice, she repeated her earlier template for ARTbreast. The following year, Borden innovated on the concept to curate ARTpurse, in which artists were invited to create a purse of two or more parts made from one or more bras. She donated profits to Buffalo’s Hope Chest Dragon Boat Team, which builds a supportive environment in which breast cancer patients and survivors stay active. Borden follows a philosophy borrowed from her father but tweaked to suit her: “Your life is how you fill it up, and that’s your job. And as an artist, this is what I can do.” She and her team (including Paula Marie Borkowski and Kelly McDonald) raised over $3,500 since 2018 and catalyzed artists to create over 200 artworks which have found homes in mammography, oncology, and gynecology centers throughout western New York. 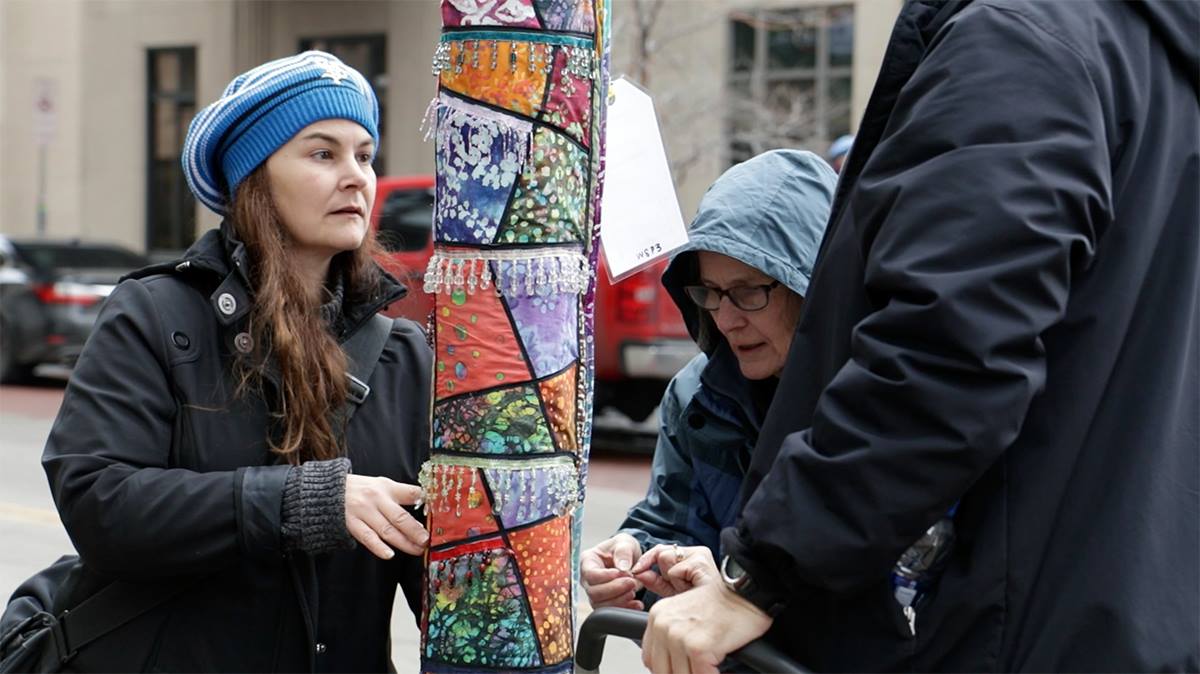 Rachel Wacker is a community curator and multi-disciplinary, social-practice artist. For years she admired the vibrancy of the Lowertown Arts District in Saint Paul, MN; and after moving there in 2010, she became part of an amazing network of community-engaged artists. In 2016, however, the privately-owned artist lofts where Wacker lived was sold for redevelopment, prompting her move to one of Artspace’s oldest projects: The Northern Warehouse. It remains among the few artist-friendly buildings left in the area. “People sometimes take the artist community for granted,” Wacker said. “They love the energy we bring, but it’s important to support those who give so much. All of the things that make this arts district wonderful didn’t happen in a vacuum.” Wacker calls the individuals who work to keep the arts district vibrant “community caretakers,” and has taken on this role herself as part of the “next wave” of artist activists post-1980s. She has garnered the trust of local businesses throughout Saint Paul, including the Saint Paul Saints Baseball Club, for which she developed a program in which artists activate the ball park during the on-season. Wacker is also behind pop-ups like the Saint  Paul Cozy Project that “yarn bombed” 170 lampposts downtown. “Visibility is one of the biggest challenges the art community faces in Lowertown,” she said. “If we are invisible, we won’t be invited to the table where we can advocate for the resources that we need to thrive … I’m always working to find legal ways to get art and artists into public spaces in our neighborhood, where we can be seen and heard.”

Act Six: Making a Difference in the Community 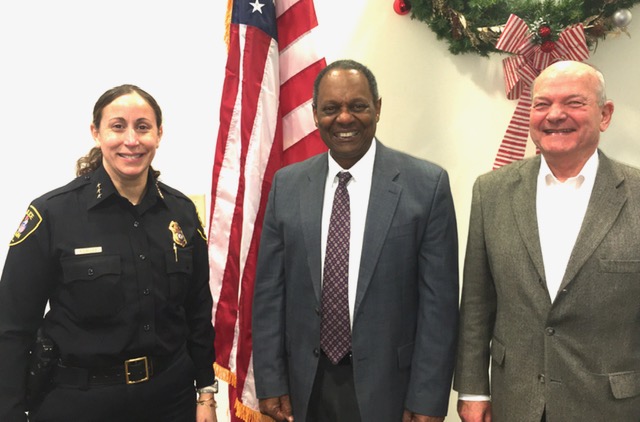 James Harvey is a veteran of the United States Army and an active member of the American Legion Post 57 in Elgin, Illinois. James also happens to be one of the original residents of the Elgin Artspace Lofts, and an avid believer in the power of service and giving back. He uses his photography as a way to build bridges in the community, and often donates a percentage of his talent and time. Since moving into his Artspace home in 2012, James has volunteered for countless organizations throughout the City of Elgin. His work has supported the Ecker Center for Mental Health, the Elgin Chamber of Commerce, and the Community Crisis Center (a local women’s crisis center). Most notably, James has been a connector in his community, pointing fellow artists and neighbors to opportunities and resources. He sits on the board for the Continuum of Care Kane County, an organization created to help at-risk families who are transitioning out of homelessness. He also has connected many to affordable housing opportunities in Elgin Artspace Lofts, and has provided his photography services to help Artspace promote their newest property: Pullman Artspace Lofts, in Chicago’s historic neighborhood of Pullman. And his hard work in his community is lauded: Last year, James was a recipient of the Bicentennial Honor 200 from the Illinois Department of Veterans Affairs. When asked what drives him to do so much and engage so many throughout the city, James says, “it’s a matter of being a part of the community, being involved, and making a difference.”